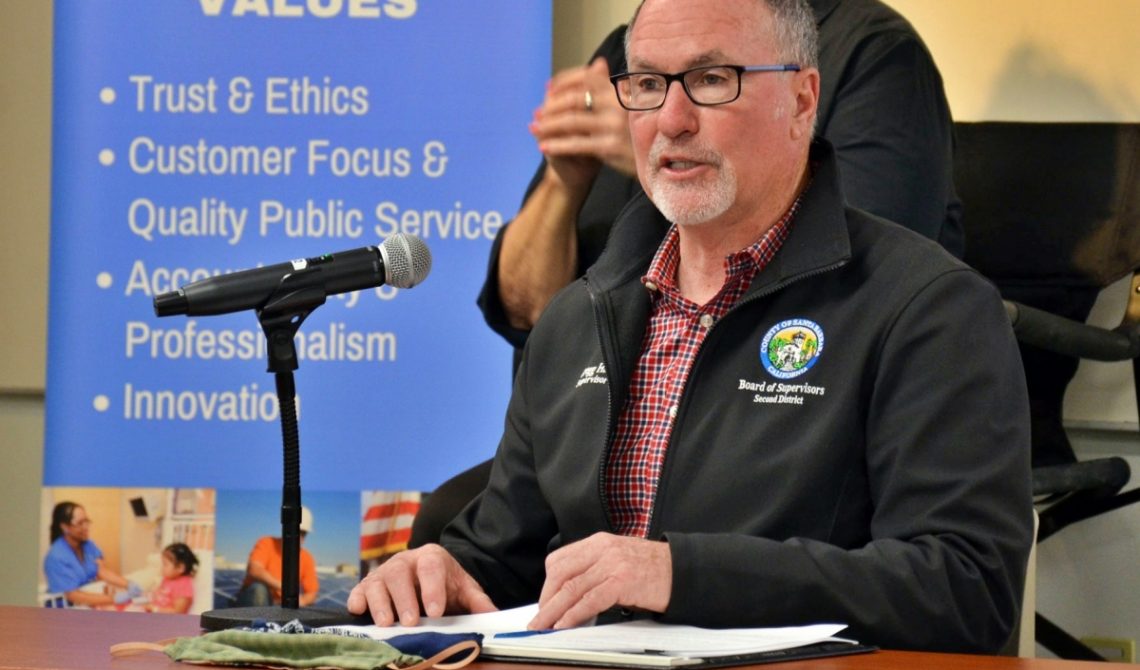 Reflecting on challenges of 2020, he points to community’s accomplishments and resilience in face of unprecedented health pandemic

Originally published on December 27, 2020 in Noozhawk

When Santa Barbara County Second District Supervisor Gregg Hart assumed the role of chairman of the Board of Supervisors at the beginning of the year, he could not have anticipated that he would be spending his time focused on disaster response and guiding the county through a global health crisis.

“When we came into the year, I was hoping to use my chairmanship to highlight the need for emergency and disaster preparedness,” he told Noozhawk.

“The coronavirus is obviously something that I never imagined would happen at the beginning of the year, and it turned into disaster response instead of disaster preparedness.”

Since the sudden eruption of the COVID-19 pandemic, Hart said he made it a priority to bring the best quality of information to the community immediately so that people would have a trusted source of information. He has led the county’s weekly health briefings, making him a familiar face in the news coverage.

“I think hosting the briefings was just sort of a natural extension of the way I saw my role,” he said. “I need to be the public face and the spokesperson of the county.”

Hart continuously defers to medical professionals and Public Health Department officials to prevent the circulation of possible misinformation, and he recognizes the local news media’s role in conveying accurate details.

“I am particularly proud of the partnership I’ve had with local media,” he said. “There’s no way we could get this information to the public effectively without it.”

Since becoming more visible to the public through the live-streamed COVID-19 briefings, Hart says he is occasionally stopped in stores by residents who commend him for being “calm, clear and honest” in his words.

“That’s what I’m most proud of, I think, that people have access to honest and clear information,” he said.

In January, the weekly COVID-19 briefings will take on a new format, according to Hart. Public Health officer Henning Ansorg and department director Van Do-Reynoso will move to a Zoom platform to streamline all the newest coronavirus-related information so that the community has access to real-time, accurate information.

While the coronavirus has made for an unprecedented year full of challenges and tribulations, Hart applauds the community for its resiliency and strength.

“Residents in the county have responded in ways that I couldn’t be more proud about,” he said. “Our community has definitely risen to the moment.”

The Public Health Department has been the county’s biggest ally through the pandemic, and Hart expressed appreciation for the nonprofit community, calling its ingenuity, creativity and resilience extraordinary.

He said community members brought out their sewing machines to make face masks for the community, businesses pivoted their employees’ time and skill sets to assist with the production and distribution of personal protection equipment for health-care providers, and families have canceled holiday traditions to accommodate public health guidelines.

“There are so many examples of ways the community has demonstrated resilience,” he added.

“The virus’ emotional and mental toll on people is profound,” he continued. “I am so sympathetic to the hardship and the real tragedies that are unfolding around us. But I am grateful for the community’s ability to respond despite this difficult time.”

Hart had a long history in local politics before taking his seat on the Board of Supervisors in 2019 after an uncontested election.

He worked as a legislative assistant to then-Assemblyman Jack O’Connell, D-Santa Barbara, from 1985 to 1991, and from 1991 to 1995 managed the Traffic Solutions Division at the Santa Barbara County Association of Governments, where he promoted local green and sustainable transportation options.

He later was appointed SBCAG’s executive director, the job he held until he resigned to join the the Board of Supervisors.

Hart also served on the Santa Barbara Planning Commission from 1987 to 1995, and was appointed by then-Gov. Gray Davis to the California Coastal Commission for a four-year term beginning in 2000.

Hart’s time as board chairman will come to an end on Jan. 12 when the position rotates to incoming Fourth District Supervisor Bob Nelson.

Nelson, like Hart, will be joining the board after an uncontested election. He was running to succeed Supervisor Peter Adam, his boss, who is retiring after two terms on the board.

Hart has confidence in his new colleague.

“He has the advantage of being chief of staff for Supervisor Peter Adam, and I believe he will serve the county well,” he said.